Memories of a Great Headmaster

I was immensely saddened to hear of the death in April 2009 of Dr. Leonard E Sharp, Headmaster of Stanley Grammar School (later Tanfield School) from 1953-1975. 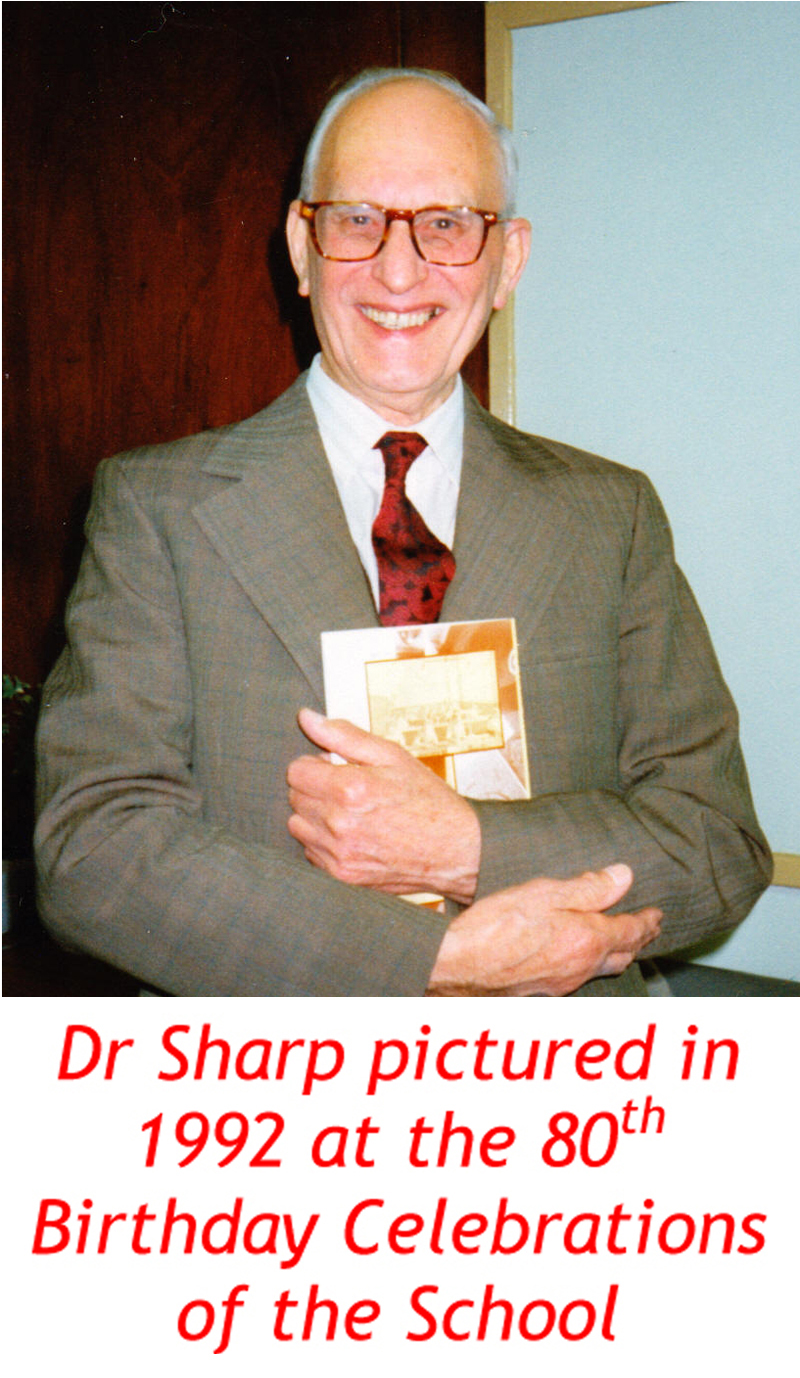 Dr Sharp was born in 1911 and, by the age of 22, he had gained a BSc. and Ph.D. at Queen Mary College and a Teaching Diploma at the Institute of Education, University of London. He came to the north-east from Reading in 1933 to teach Maths at Hookergate Grammar School, which had just opened in 1932 and, apart from five years of war service (1941-1946), he was Senior Mathematics Master there from 1935 to 1953. He took lodgings with a local colliery manager whose daughter he later married and they settled in Rowlands Gill but later moved to Whickham. He was the devoted father of 3 sons and a daughter and took pride in a large family of grandchildren and great grandchildren, now scattered around the world.

I first met Dr Sharp at Hookergate when I was 11 and I was instantly struck by a feeling of awe; a feeling that never left me. At that time he was the definitive tall, dark, handsome young man, inspiring schoolgirl crushes. Indeed he once posed, like a young Adonis, wearing P.E. kit, for an 'A' level Life Drawing exam and caused many a female heart to flutter. However, he also had a stern side, a formidable presence, commanding respect.

It is that forbidding aspect that most pupils remember and, as he strode the corridors with his academic gown flowing behind him, it was evident that he was a force to be reckoned with. For my first two years in the school I made myself scarce whenever he swept into view. Then I became part of an educational experiment which he instigated. Twenty pupils were selected to miss out the third year in order to proceed rapidly towards 'O' and 'A' levels and, consequently, I was precipitated into the sixth form as a nervous fifteen year old, for the first time was taught by 'The Doc' (as he was affectionately known). Ever the optimist, he attempted to teach us Logic and I vaguely remember that we had to prove obscure abstract theories, such as "the table in front of us did not exist"; "if one cow is brown then all cows are brown" and so on.

We struggled, unable to do our homework but afraid to leave it undone and, on one occasion, we were driven to copy from the only pupil who had the answers - a teacher's daughter. I had heard that Dr Sharp worked in Military Intelligence during the war and, sure enough, he saw straight through our subterfuge, guessed who had copied from whom and even remembered the incident some 8 years later when I applied for the post of Head of Art at Stanley Grammar School, where he was then Headmaster.

However, all was forgiven because he was pleased to meet one of his protégées again. The job was mine and he did everything in his power to help and encourage my efforts. On my first visit to the school, he asked if I had brought my wellingtons as the Art room floor might be knee-deep in plaster and I was shocked to discover that he was not joking. Furthermore, the department was lacking in the most fundamental equipment, such as furniture. He corrected all these deficiencies, and gradually increased the Art requisition to fit an expanding department. He allowed me, with the help of Mr Brabban, to have the pupils' pictures framed and displayed throughout the school. Being a skilled draughtsman himself, he always took an interest in the artistic creations, even to the extent of moving a ladder numerous times a day for a girl who was painting a mural of Durham Cathedral on one of the corridor arches.

After several years, a brand new Art department was built, with a view of fields and woods but not of an approaching Headmaster and he used to enjoy visiting my classroom via the stock cupboard and materializing like Dracula behind me. To his amusement and the delight of the class, I would leap in the air and give an involuntary shriek, as if dancing the Highland fling.